skip to main | skip to sidebar

Well, the response has finally been sent out to everyone who signed my on-line petition. I assumed Downing Street would merely pass it over to the Welsh Assembly. Instead, it gave the official response already given out by the WAG.
We have read Pembrokeshire County Council's stance when they meet officers at the Welsh Assembly which could give the impression that their terms would make it difficult to bring the 2 sides together to be able to agree to tolls being ultimately abolished.
If the meeting has not taken place, I would urge both sides to work to find the "real deal" for the people of Pembrokeshire as the current situation really needs to end.
I hope common sense will prevail .....on both sides, so we can have a "win win" situation.
Somehow, I have my doubts. I hope I am wrong. Signing off ......... for now, anyway!
Posted by Andrew C. Lye at 10/29/2007 08:00:00 am 43 comments:

Officers run the Welsh Assembly Government - Official (to me, anyway!)

Throughout, I have tried to maintain an open and impartial view on the Cleddau Bridge.

I have finally received a response from Michael Hillier (Roads Network Management Admin Team) at the Welsh Assembly Government in response to my letter of 29.7.07 to the Deputy First Minister, Ieuan Wyn Jones.

Michael's letter dated 31.8.07 just reiterates his response to me of 1.8.07, in reply to my letter to the First Minister. But he does add that WAG officials should hopefully be meeting "PCC sometime in September, but the exact date is to be finalised."

I had hoped that with Plaid in Government that maybe things might change in Cardiff and that I could have at least had a response from the DFM. After all, Wales has a population of just over 2 million. In England, I would guess there are Councils that must be similar in size.

I feel most disappointed at the fact that the only responses have been from officers. Things obviously are not changing with Plaid in Government and it just confirms in my opinion that officers pull the strings .... I am obviously somewhat nieve, but I had expected better, on such a major issue.

Finally, I saw on the BBC News today that the new SNP "Government" in Scotland will be introducing legislation to abolish bridge tolls.

Maybe we should get rid of Plaid and vote SNP.

Being in Government means taking decisions. With Plaid now part of the WA Government, it could mean no change as far as Pembrokeshire is concerned, even though their Leader has 2 "FREE" bridges that link his constituency of Anglesey (Ynys Mon) to the mainland.
As BLOGSPOT has introduced this polling facility, I have added the poll, which you can enter (free of charge!).
Should there be no tolling at all in Wales, or should Pembrokeshire be the exception? The choice is yours ......
Posted by Andrew C. Lye at 8/23/2007 08:03:00 am No comments:

Campaign steps up to 2nd Gear

I would like to put on record my thanks for the time and courtesy extended to me by Paul Davies AM, and his PA (David Howlett) for seeing me this morning to discuss progress and how to take the campaign further.

Basically, I am reaching the point where I cannot take the matter any further myself (unless I dress up as Rebecca and go and burn the toll booths downs, LOL!) as its now over to the likes of Paul Davies, Angela Burns and Alun Davies as our local AM's, along with Pembrokeshire County Council, and then the WAG itself.

I stressed the need to get a Pembrokeshire Grouping together to take it forward as a joint Pembrokeshire campaign as basically, everyone is singing from the same hymn sheet.

I will report back as to what Ieuan Wyn Jones has to say and then I will give it a couple of months to see what is happening, before seeing how things are progressing.

When the petition deadline came at midnight on 11th August, the total showed 1549. As I assumed the petition would be removed, I took a copy and issued a press release.

As I am due to meet Paul Davies, AM, today, I thought I had better copy the updated figure. It then showed 1554.

I have no idea what is going on, even though it clearly states the petitions is now closed as its deadline has passed, somehow signatures are being added. I just assumed it would not allow any further names to be added.

My aim is to try and take the issue further by trying to get an all "party" group together that will keep the matter under constant review and not allow it to die a natural death, so that the status quo can continue.
Posted by Andrew C. Lye at 8/22/2007 06:51:00 am No comments:

I have been meaning to get the relevant sections of replies received from Rhodri Morgan and Cllr John Davies, onto this blog. I cannot say the delay is due to the fine weather, as its been appalling!

"The current position is that officials from the Welsh Assembly Government Transport Wales are yet to meet with Pembrokeshire County Council regarding the trunking of the A477 between Pembroke Dock and Johnston, which includes Cleddau Bridge. As such, no policy has yet been developed regarding the adoption of the bridge, timesclaes or the issue of tolling. The trunking of the network is currentl low priority due to potential financial requirements and statutory issues".

"... not at any time in the past has the WAG or the former Welsh Office suggested that they would abolish the tolls. In the absence of any firm commitment in writing from Ministers or Senior WAG Civil Servants, it is only right and proper that we assume that the present principle of charging would continue. Even recently in questions Rhodri Morgan's final words were explicitly clear, 'I makeno promises'.

Secondly I can give you a categorical assurance that as a County Council, we are positive in entering into dialogue with WAG with a view of negotiating a 'take over' of the bridge and its future maintenance plus its associated route. This would be done on the strict proviso that the Pembrokeshire Tax Payer benefits from such a change. I am sure you would agree to do anything else would be nothing less than reckless from our part.

I hardly need to remind you that on previous occasions over a period that spans beyond this Council, firm commitments and assurances have been less than forthcoming from WAG and its predecessor the Welsh Office, nevertheless we will be making another attempt to achieve wha is for the long term good of the whole of Pembrokeshire and its people."

WHILST WRITING, I am still awaiting a response from Ieuan Wyn Jones, the new Deputy First Minister who also holds the Cabinet position of the Economy and Transport. I guess a response is likely in the very near future, in accordance to WAG timescales given to respond to correspondence.

The On-line Petition may be nearing its end .... BUT THE FIGHT HAS JUST BEGUN

If anyone thinks that just because the on-line petition is coming to an end, that I will disappear off into the sunset and never be heard of again, they are wrong.

I am not going to be satisfied until a means is found whereby tolls are finally lifted from the Cleddau Bridge. The options available could be any of the following:-

There is an option 6, but I have never advocated the burning down of the tolls booths as Rebecca returns.

Something has to be done, and that is what has been going through my mind in recent weeks, to keep the momentum going.

One Day, Pembrokeshire Will Be Free!!!! 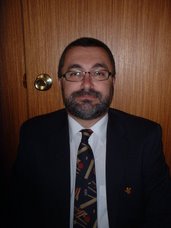 The Spirit of Rebecca lives on ....

About Me - Andrew Lye

Andrew C. Lye
Johnston, near Haverfordwest, Pembrokeshire, Wales, United Kingdom
I was born in Devizes, Wiltshire in 1959. I am fortunate to have had a good education (STATE) and got my degree from Portsmouth Polytechnic in 1985. I have always been interested in local politics and was a Councillor on Trowbridge Town Council (1987-2001) and West Wiltshire District Council (1991-9). I was fortunate to have served in senior positions, during that time. Including Leader of the Council (1994-97) Since moving to Pembrokeshire, I was made redundant within a matter of months and since 2002, I have run my own business. I am no longer politically active, but take an interest in local matters. Since 1987, I have been married to Ann and we have 2 marvellous dogs - Randolf and Jessie. We consider ourselves to be most fortunate to live is such a beautiful part of Wales. NOW, I consider myself to be David taking on Goliath. I have no elected position (and I dont seek another) and am just a minnow taking on the might of Pembrokeshire County Council. David defeated Goliath, so I look to David and Rebecca for inspiration. 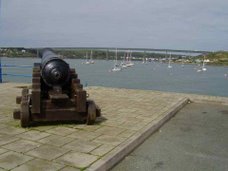 "The toll booths are at the other end, you fool!" 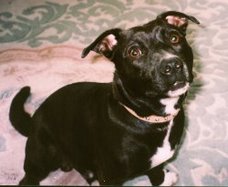 "Have you done the Poll on this Blog?"